My recent trip to explore Tenerife with Thomas Cook Airlines changed my perception of what this Mediterranean island has to offer. It’s not just sunloungers, cocktails and all inclusive stays. It’s actually a great destination for action and adventure on holiday.

Thomas Cook Airlines kindly invited me and a team of adventure travel bloggers to join them for a four day trip to Playa de Las Americas to see just exactly what Tenerife has to offer in terms of outdoor adventure. Now my knowledge and perception of Playa de Las Americas prior to this trip was limited! I’ll be honest, I had succumbed to the reports that it’s the party capital of Tenerife so I was keen to experience and learn more about the other side of the region.

A promise of winter sun

Whilst the Canary Islands are well known for their promise of winter sun, I’ve always considered Tenerife to be out of my league in terms of my cycling ability. But where there’s travel involved, I’m always up for an adventure and a challenge. With the call of promised sunshine I was more than willing to see for myself!

Don’t get me wrong, the cycling in Tenerife can be challenging; it is after all a volcanic country and a destination for pro-cyclists to venture to for their winter training, but I can confirm it’s also accessible to the ordinary cyclist! Hooray! With a little bit of pre-trip training, Tenerife has some great routes to both challenge you and improve your fitness. Needless to say, I can happily confirm that Tenerife has much more to offer than just 12 hours next to a hotel swimming pool.

Cycling in Tenerife – adventures with an ex-pro

Myself, Lucy from Paddle, Pedal, Pace and Georgina from Fitcetera made up the team of cyclists ready to face Tenerife’s undulating roads. After a hassle free flight with Thomas Cook Airlines we had a peaceful night’s sleep in a wonderful four star hotel on the edge of Playa De Las Americas. After a breakfast buffet fit to feed the five thousand we were ready and excited to start our adventure cycling in Tenerife! 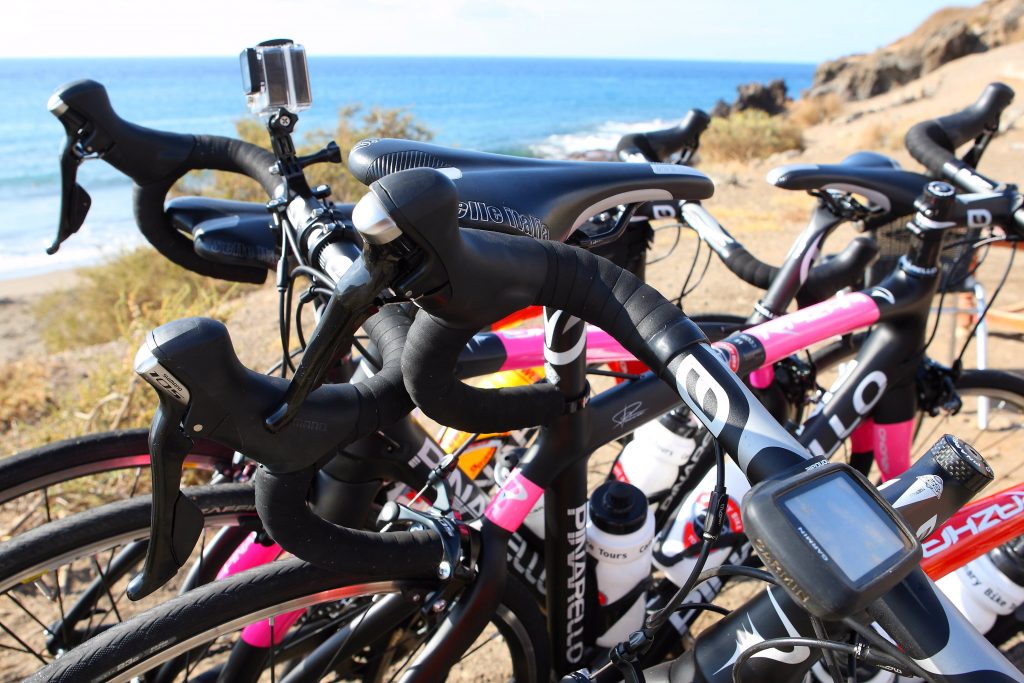 We headed to the Canary Bike Tours shop where we met our tour guide, Unai Yus and became acquainted with our Pinarello Razha bikes. Not only were we going to be riding great bikes but we were also to be in very good hands! Unai is an ex-professional cyclist from the Basque country who has been living in Tenerife with his family for a couple of years.

Now, I’m not going to lie. I was concerned about the cycling. Those that follow my blog regularly will be aware that I have lower back issues and one of the many reasons I love to cycle is because it’s great for my back. 2016 has seen my cycling fitness drop due to another disc issue and the need for two spinal blocks and some facet joint injections earlier in the year. I knew I was going to be cycling with girls who were definitely going to be fitter than me – after all one is a triathlete and the other is massively into cross-fit! And before my trip everyone who heard where I was travelling to reminded me of how hilly Tenerife is!

Well, yes it is hilly and yes, predictably, the girls were more prepared for Tenerife’s roads than I was in terms of fitness but exploring and cycling Tenerife was fun! By exploring Tenerife on a bike, I saw lots of the island I wouldn’t have otherwise seen!

Cycling in Tenerife – the route

Unai led us out of Los Cristianos and uphill over Montana de Guaza. My legs were immediately shouting at me and I can’t lie, it was a shock to the system! Not only the inclines but cycling again in heat. 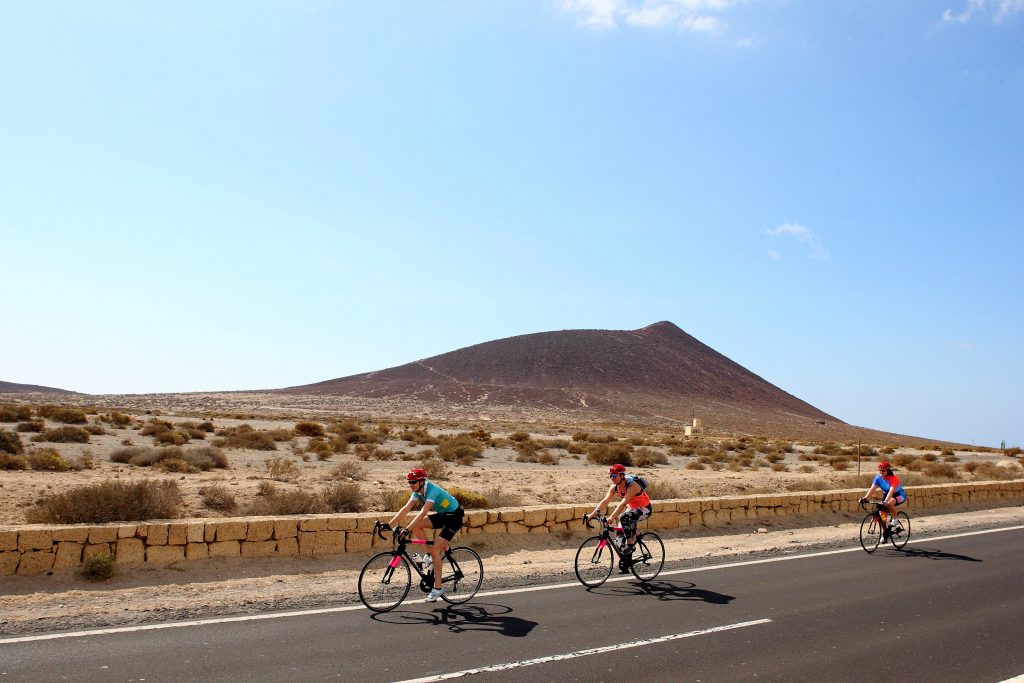 Unai took us on an interesting tour of the south side of the island. This is much less lush than the north side but it offers warm, predictable weather all year round, especially in the winter months when the north side can be a lot cooler and more susceptible to rain.

We cycled past local markets and the pretty fishing village of Las Galettas, in the Santa Cruz region – possibly the least developed resort on the south coast of Tenerife. We then headed on to Chiringuito Pirata, a small cafe bar situated on Playa de la Tejita, overlooking the red coloured Montana Roja. Sat overlooking the sea, we fuelled up on ham sandwiches whilst admiring the view. The glorious sunshine kept the muscles warm before the second half of our cycling in Tenerife.

From Playa de la Tejita we cycled east, passing numerous banana plantations and tomato farms before taking a breather by El Médano, a small bay where I was to spend the following day stand up paddleboarding a 9km distance on the calm sea waters, which was a wonderful experience. If you’re into surfing, sup, windsurfing or kitesurfing this is a great little spot! And you can be taught by ex-Spanish champion, Sofia Rodriguez at Tenerife Kitesurf situated here.

Back on the bike, we headed inland towards the mountains and after a few more miles of climbing. My legs were so pleased to reach the most amazing, winding downhill section. My ex-sprinter legs were finally able to come into their own, pedal faster and enjoy the acceleration. It was an absolutely thrilling ride. It was the only down hill section of our 36 mile ride but it was a long one and so worth it!

The bottom saw us venture off and stop for lunch at La Tabaiba. Looking at this place from the outside, as non-local you probably wouldn’t consider stopping, but Unai knew this place was good. The seafood paella was fabulous and the staff were really welcoming and friendly!

By this point, and aware we had more action and adventure to follow on day two, we were ready to take the more direct route back to the hotel to finish our ride. In total we cycled 34 miles with 2,421 feet of climbing.

The weather was warm and sunny for much of the ride with a light breeze which was lovely for cycling. We did experience some over cast grey clouds, but to be honest these were a welcome addition and were great for cooling us off and providing some shade.  The rain kept away for the whole four days apart from a short-lived light rain shower during this ride. We were told though that this was actually really unusual for the south side of the island at this time of year.

Top tip for cycling in Tenerife

You’ve probably gathered, but I feel a sense of duty to tell you, just so that you’re prepared better than I was, that Tenerife doesn’t really do downhill. The roads climb, albeit steadily, but they are long stretches of climbing. If it’s hill training you’re looking for whilst cycling in Tenerife, or you want to test out your summer UK hill training, then this Canary Island definitely has it covered. The south side of the island has long, steady climbs, whereas the north side of the island offers steeper, more challenging climbing.

So, feeling prepared and now the UK winter is well and truly upon us, promise yourself some adventure in the sunshine this winter and get yourself booked in for some cycling in Tenerife.

How to Get There, Where to Stay and Where to Eat:

The best food: El Cine in Los Cristianos harbour was my favourite eating experience of the trip – we had the most amazing tapas at this place. Well favoured by the locals and apparently it serves the best Octopus in Tenerife. It was delicious but get there early evening as this place gets busy!

Our hotel: We stayed at the Hotel Conquistador, a 4* H10 hotel in Playa de Las Americas.

Flight: Thomas Cook Airlines fly to the south of Tenerife all year round, several times a day from airports throughout the UK. Flights tend to cost in the region of £60 for a return trip.

**Disclaimer: I was invited to #ExploreTenerife as a guest of Thomas Cook Airlines UK. As always, my opinion is entirely my own. For more details about my disclosure policy please see here.**

3 Comments on Cycling in Tenerife