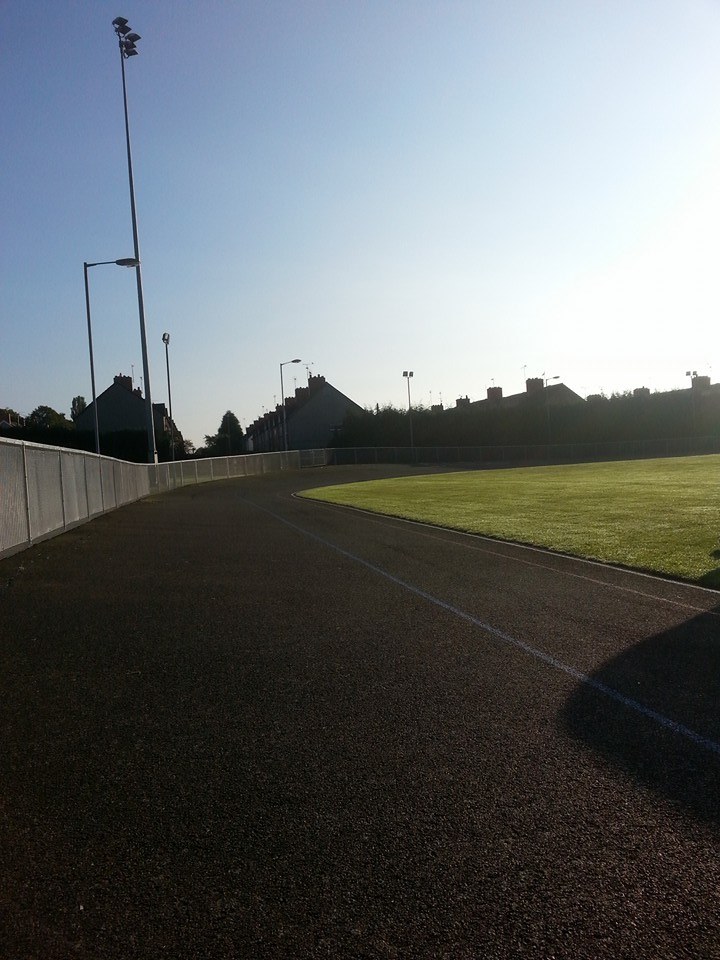 I hate Sundays. As a kid they were always the day of the week we did nothing. They can be the dullest day, but just over a week ago I had the best Sunday ever…spent with two lovely British Cycling coaches learning some new track cycling skills!

A couple of months ago I mentioned on Twitter how I would love to have a try of track cycling. Derby Velodrome is opening soon and I would just LOVE to have a ride around there – and it’s local. How cool is that! It was the London 2012 Olympics that really fired my enthusiasm as I, Little Miss OCG and my OH sat bellowing at the TV screen, filled with excitement as Team GB roared to success and won seven fabulous gold medals in the track competition.

Shortly after my tweet, I received an email from Simon Reavill, a British Cycling qualified coach, inviting me to a British Cycling approved novice track cycling coaching session at Forest Town Welfare track near Mansfield. Regular readers will remember that earlier this year I set myself some cycling challenges for 2014 and track cycling was up there so this sounded too good to refuse…but as you’ll know if you pop by regularly, I’ve had a summer of chest infections and at that point, I was too ill to go along.

Thankfully though, there was another session planned and two weeks post chest infection I decided to give it a go. Myself and two lovely friends from my women’s cycling club went along to learn a few new things. And it was BRILLIANT!

Now, I’d be lying if I said I wasn’t nervous. I’d re-checked the details the night before and realised that there were going to be nine of us – I had originally believed it was to be an all women’s session and then I saw the names of four men on the participator list…and so the nerves set in! Honestly, I was really scared, barely able to stomach my porridge for breakfast on the morning of the session.

Aargh! What if I fall off? What if I can’t keep up? They’re all going to be better than me! – Me

I’m so unfit after being ill for much of the summer – two long lasting chest infections since June, the most recent one in August lasting five weeks made my asthma flare up – so I was really nervous that my cardiovascular fitness was going to hold me back. But I was determined to give it a go and along with the nerves, there was also a whole lot of ‘woohoo – let’s do this’ inside!

The car journey to the track with my two friends and fellow virgin track cyclists was a quiet one – particularly after I mentioned the fact that track bikes have no brakes, no gears and your feet are clipped in! Eek! Silence! It was clear I wasn’t the only nervous one…which was actually quite reassuring.

So what do you learn on a novice track cycling coaching session?

Well, we learned an awful lot to be fair! I’ll be honest, I’ve never changed the pedals on my bike – I’m embarrassed to say I always get my better half to change them for me – but the session started by transferring our bike pedals across to the track bike. So I learned how to do that (via a quick verbal lesson from my hubby in preparation the night before! I have no excuses not to do it myself now). Then, once we were all set up and safety checked, we learned probably the most important skill…how to stop! There really are no brakes on a track bike and even when you want to stop you have to keep pedalling, no free-wheeling at all, so controlling speed and learning to stop whilst still moving the pedals really was a skill that was kind of critical!

Here, I am having just completed my first couple of laps on the track bike, hanging on to the rail after un-clipping ready for a de-brief. Yeah, OK, so I know the bloke behind me is looking far more relaxed about it than I am, but after a couple of laps around the track stopping and starting using the rail, I pretty much had it sorted! Hence the smile! 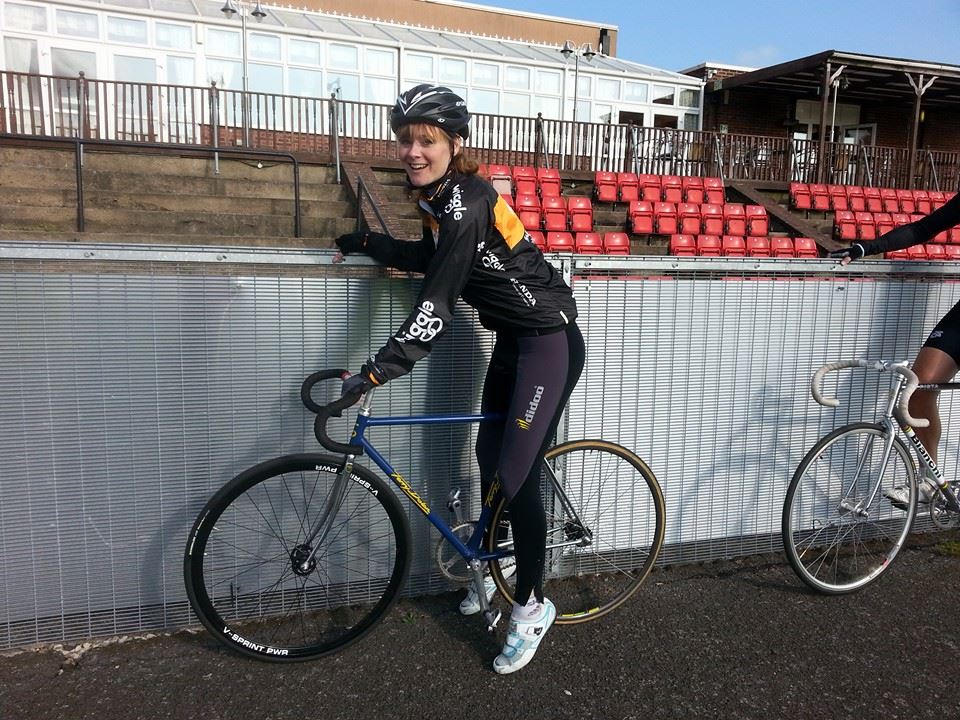 So the first challenge, and the one that was worrying me most, was done! The relief was quite something…then the next challenge came and the nerves came straight back.  That was pretty much how the three hours passed for me, with a roller coaster of emotions. I don’t think I’ve ever said ‘I’m scared’ to myself so many times, or felt my stomach quite so high in my throat! But what a buzz! We learned so much stuff that at the beginning I really would never have believed I’d be doing.

Here’s what we did….

So we learned and practised basic and some intermediate track cycling techniques, we learned how to use the bank to control our pace, how to ride closely to the person in front without causing an accident and developed skills that allowed us to take part in simulated race environments. Yeah, I know! Pretty damn cool, hey!

1. Bike check and safety
2. Mount and dismount
3. Adjusting speed with a fixed wheel bike
4. Stopping safely at the rail
5. Observation
6. Following a leader and changing front
7. Sprinting off the front to the next group
8. Riding side by side
9. Holding a rider at the start
10. Scratch race
11. Sprint race
12. Keirin

Simon and his fellow coach, Ian Scales, were amazing. Patient, reassuring, encouraging and very knowledgeable. They debriefed before and after every skills practise and ensured we felt comfortable with everything we were learning. A huge thank you to them for putting us at ease.

A big shout out goes to my fellow club cyclist, Amanda, who before this session had never ridden a road bike before, never mind a track bike. We have a few women in our club who have hybrids, Amanda being one of them, so the thin tyres and drop handle bars were something completely new to her…and she was clipped in to her pedals….with no brakes. She was an absolute star! So, let Amanda be your inspiration. If you’re scared of giving track cycling a go, don’t be. Try it, I reckon I can guarantee you will love it! There were huge smiles all round from us!

We had an absolute blast on the day and I’m so glad I also got to share it with friends – I was so nervous beforehand, I may not have actually gone through with it had it not been for them! The guys we trained with were all great. Although we all had different amounts of experience and fitness, when it came to the track, we were all new to it and so on par with one another. One thing we learned was just because you consider yourself experienced on the road, well, basically, it counts for nothing on the track. The skills are very different. The coaches were fab and ensured no one felt in any way less capable than anyone else.

We all achieved great things, smiled LOTS and left feeling very proud of ourselves. Apparently our riding side by side was quite spectacular!

For me, Sunday 21 September is going down as one of the best Sunday’s ever! Next stop Manchester Velodrome!

All images © Ordinary Cycling Girl unless otherwise stated. Not for republication.